Over the past weekend, Chek Jawa and reportedly Beting Bronok suffered mass deaths of intertidal creatures. I was at Chek Jawa with Team Seagrass last weekend and it was indeed a sad sight. There were many dead and dying carpet anemones and sea cucumbers. The smell of decomposition lingered in the air and the slight drizzle did little to cheer the mood. 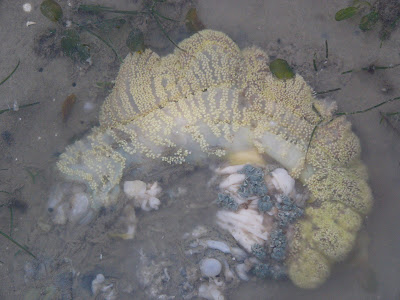 As the field orientation proceeded, one of the volunteers spotted two little leaf slugs. I smiled. Amid the gloom and doom, the leaf slugs are still surviving. Chek Jawa is not dead and will remain alive as long as we protect it. 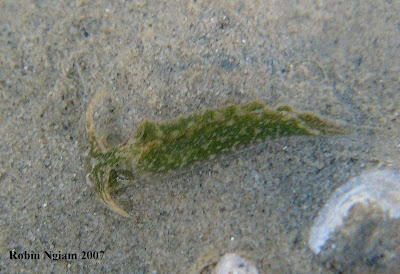 This leaf slug is an Elysia species. Leaf slugs feed mainly on algae and appear green because of the presence of chloroplasts in their digestive system. These creatures have evolved a symbiotic relationship with algal chloroplasts which they suck directly when feeding on algae. The fascinating leaf slugs can then use the ingested chloroplasts to feed themselves photoautotrophically. Some scientists have even referred them as solar-powered! 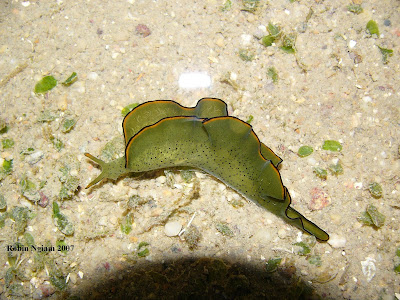 This leaf slug is an Elysia ornata from St. John’s Island. It is one of the most beautiful fauna we can meet on our intertidal shores.

Amiable post and this post helped me alot in my college assignement. Thank you for your information.

Oh my goodness! Amazing article dude! Many thanks, However
I am encountering troubles with your RSS. I don't understand why I am unable to join it. Is there anybody else getting identical RSS issues? Anyone that knows the solution can you kindly respond? Thanx!!

each time i used to read smaller content which also clear
their motive, and that is also happening with this post which I am reading at this time.