My initial impression of sea cucumbers was that they are really boring and rather disgusting creatures. They look like huge bloated worms and most of the time doing nothing but just….hanging around. But then I got my hands on some echinoderm books and I started to develop a liking for them, more so after encountering several sea cucumber species during the course of my work. 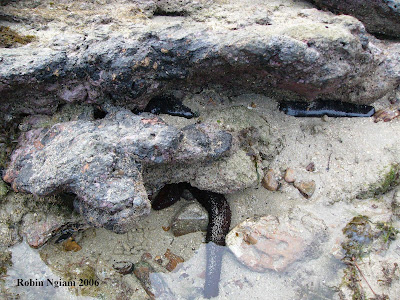 Sea cucumbers have evolved to lie on one side with the mouth and anus on opposite ends of the body. Their skeletons have been reduced to microscopic ossicles which are important in identifying species. Sea cucumbers feed by means of filtering suspended food particles or organic laden sediments using their feeding tentacles. They thus play an important role in helping to turn over reef sediments. 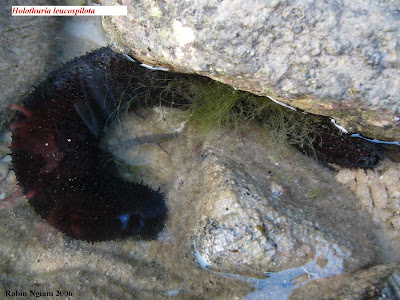 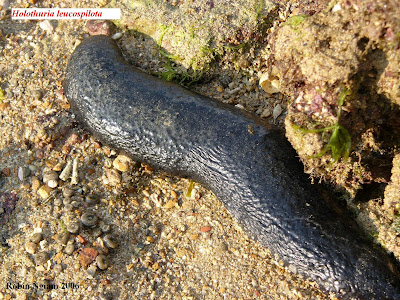 Holothuria leucospilota is one species I’ve encountered numerous times. They are usually exposed at low tide and are conspicuous in rock crevices. They kind of look like the excrement of a giant marine creature.

H. leucospilota is one of the species that ejects sticky white threads called Cuvierian tubules from the anus as a defence strategy. The repugnant tubules are believed to repel or entangle would be predators. 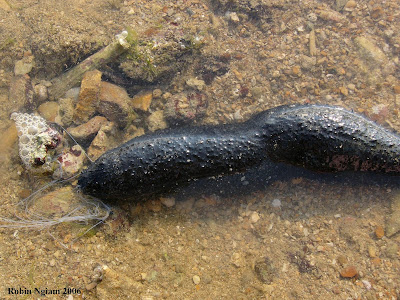 Sea cucumbers may be soft bodied and appear docile but they are not to be underestimated!