Prof. Peter Ng gave a good speech at an Earth Day event last weekend. He touched on nature conservation in Singapore. Two main points stuck in my mind: 1) There is much more to discover from Singapore’s natural habitats. 2) We have to conserve and protect because our natural heritage belongs to us and nobody else and is ours to keep.

His speech strengthened my conviction to partake in local nature-related work. We must fight for nature conservation because if we don’t, we’ll not only lose our heritage but also things that maybe new to science.

Small invertebrates are a case in point. Many of them have been largely ignored by science. Some of them are difficult to study, some are hard to find and most are largely disregarded because they lack the ‘cute’ factor. But in actual fact, many invertebrates are fascinating and cute. 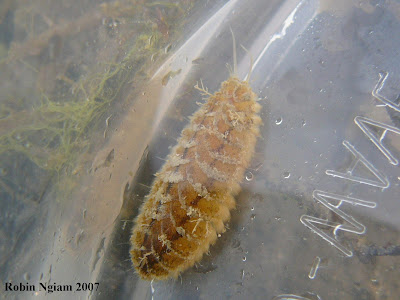 When I spotted this little critter, I thought it is some kind of sea slug. On closer examination, it turns out to be a polychaete from the family Polynoidae. It hardly looks like a worm and even has a bug-like motion.

There are 64 polychaete species in Singapore waters with only two species from the Polynoidae family. This is based on the last major polychaete study by Prof. Chou in 1993 where he reported 29 first time records for Singapore. 14 years has passed and Wilson has found several more new records.

Singapore certainly has many more minute fauna waiting to be revealed.

Picture and video taken at: A southern offshore island, March 2007.

Thank you, that was extremely valuable and interesting...I will be back again to read more on this topic.

Thanks for sharing this link, but unfortunately it seems to be offline... Does anybody have a mirror or another source? Please reply to my post if you do!

I would appreciate if a staff member here at singaporefauna.blogspot.com could post it.

Cool website, I had not come across singaporefauna.blogspot.com earlier in my searches!
Continue the good work!