Sand Stars (Archaster typicus) is one of the more easily seen sea star on our shores. During low tide, they will emerge from the sandy sediments and they could also be located by the star-shaped impressions left on the sand. This is especially so on the sandy shores of Pulau Semakau. We spotted several mating pairs and the Temasek Poly students wondered how copulation takes place. 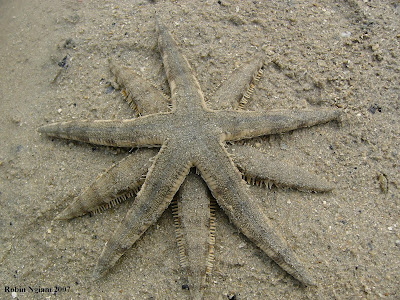 A. typicus belongs to the family Archasteridae. This is a small family with only one single genus, Archaster. Sand Star males are slightly smaller than females and a mating pair will always involve the male superposed on top of the larger female. However, fertilization occurs externally where both male and female synchronize the release of sperm and eggs. Thus copulation, which infers internal fertilization, is probably the wrong term to use. Pseudocopulation is the term widely used by scientists. 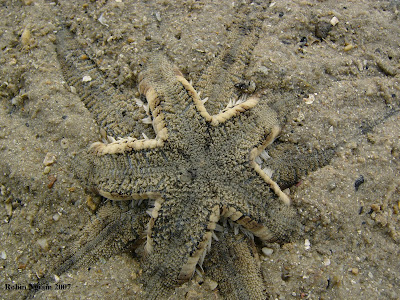 Sand Star is one of only two sea star species currently known to perform male-on-female superposition sexual behaviour. Most other species conduct aggregate spawning. It is not exactly clear why Sand Stars superpose during breeding. It could either be to increase the chances of fertilization when the eggs and sperm are dispersed into the water or it is a mate guarding behaviour.

what are they doing?

The Sand Stars are doing a mating behaviour whereby the male has gone on top of the female. Fertilisation takes place externally when both the female and male release their eggs and sperms respectively into the water.