A recent survey at the Central Catchment turns out to be one of the best I’ve had this year. Rare creatures sighted, good weather and good companions made a perfect morning in the forest. We spotted three snakes that day. The stand out has to be this Kopstein’s Bronzeback (Dendrelaphis kopsteini). 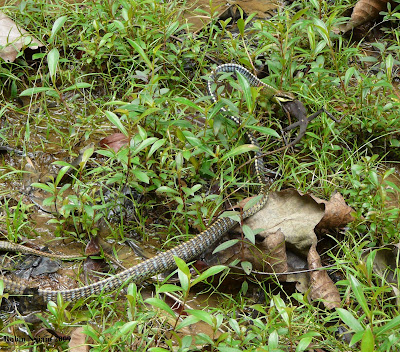 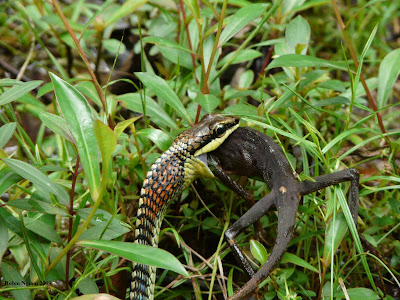 Also known as Red-necked Bronzeback, this species has always been confused with Elegant Bronzeback (Dendrelaphis formosus). It was only in 2007 that scientists sorted out the taxonomy and designated it as a separate species. We now know Kopstein’s Bronzeback can be distinguished from other Bronzeback snakes by its bright orangey red colour at the back of its neck. The species is widespread locally, being also present in rural or suburban areas. Although widespread, it is considered rare by Baker & Lim (2008) and has a status of vulnerable in the Red Data Book. Its distribution is from Thailand down to Peninsular Malaysia and Sumatra. 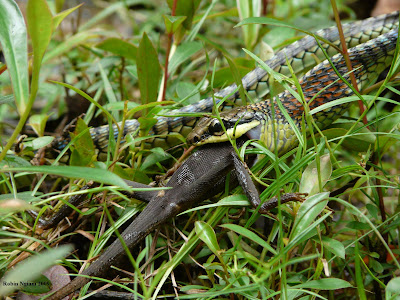 We were very lucky indeed to chance upon this individual consuming a lizard. When we first saw it, it had already captured the prey. After a brief struggle, the snake proceeded with lunch, swallowing the lizard in a matter of minutes. Our presence did not bother it at all thus enabling me to get a close video. Spotting creatures in the wild is always great but a window into the midst of their daily activity is unquestionably a huge bonus.
Kopstein’s Bronzeback is named after the Austrian herpetologist Dr. Felix Kopstein (1893-1939).

Wow, great post with rare photos and video. Were you able to identify the lizard?

I think its a Green-crested Lizard