I remember a rather horrifying encounter with a dragonfly when I was very young.

I was a five year old kid visiting my grandma’s in a kampong in Malaysia. We were sitting at the dinning table when my uncle approached me with a gift. As he opened his fist, a huge back dragonfly suddenly flew into my face. It gave me a fright!! To make matters worse, he was holding a string tied to its abdomen and so the flying ‘monster’ was zipping all over me and the dining table. In an instant there was complete chaos as the dragonfly crashed into everyone and right into the dishes scattering all the food. It finally demised in a bowl of hot soup and my uncle got an earful from my relatives.

Now I’ve re-acquainted with the dragonflies and developed an immense liking for their beauty.

Dragonflies come in all colours imaginable. Their zipping and hovering flight are a delight to watch. They play an important role as indicators of environmental disturbances and many consider them a indicator species in streams and marshy habitats. 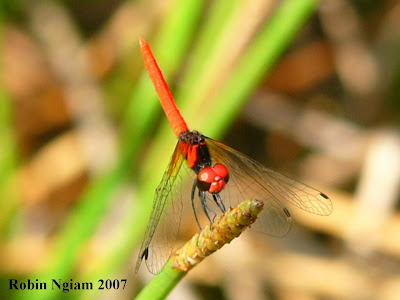 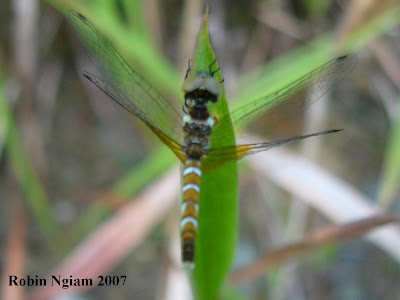 Nannophya pygmaea is one of the smallest dragonfly in the world. The adult male is bright red and will defend a small territory of only about one metre square. An interesting study on its territorial mating behaviour revealed that variations in male mating success is correlated more to the number of sunny days and less on male size.

Singapore’s plan to transform its concrete canals into landscaped channels has brought odonates into the forefront among local naturalists. There is now an initiative to study and update the status of Odonata in urbanised S’pore.

For me, this old song from 小虎队 best sums up the dragonflies.