Sex. What is your favourite position? For Odonates, it is the Wheel.

I spied this pair of Ceriagrion cerinorubellum damselfly in the heat of passion during my fieldwork. The female below had curled her abdomen towards the male’s genitalia to receive the sperm. And with that, the couple formed a beautiful heart shape wheel position. But all is not lovey dovey because the pair was engaged in a reproduction battle of wits. 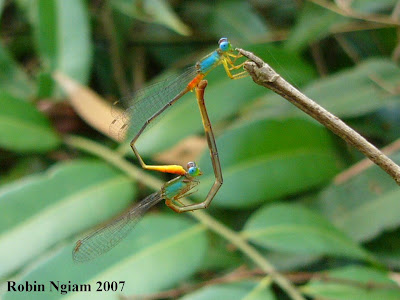 The pair was locked in this position for almost 10 minutes. This long copulation period allows the male damselfly to remove rival sperm from the bursa copulatrix, a copulatory structure in the female. However in a classic case of cryptic female choice, the female retains control over reproduction as she can control the sperm reserves in her spermatheca. Knowing this, the male will prolong copulation to elicit the female to eject rival sperm and tempt her to use his sperm for fertilisation.

Thank goodness human reproduction is not this complicated.

C. cerinorubellum is a very common and colourful damselfly. They occur frequently in suburban gardens, drains and ponds. They are also vicious predators capable of tackling other damselfly species twice their size. 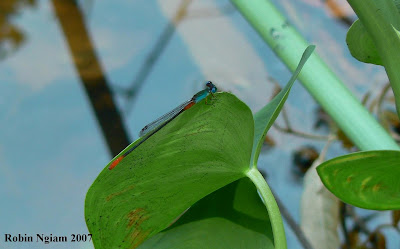 Colourful, ferocious and sexually competitive. Quite a character for a tiny insect!

A. G. Orr., 2003. A Guide to the Dragonflies of Borneo. Their Identification and Biology, Natural History Publications (Borneo) Sdn. Bhd, Malaysia.

Binary Options is the way to [url=http://www.brokersring.com/]make money[/url] securely online