I reckon the most impressive of Singapore’s dragonflies are from the family Aeshnidae. There’s about 400 species worldwide. They are characteristically robust in built; are fast strong fliers making huge sweeps around their habitat; and several species are crepuscular. Nine aeshnid species have been recorded in Singapore. Anax guttatus (Hairy Emperor) is the most common as it can be found in open habitats of big ponds or lakes. Species of the genus Anax are well-known for their territoriality. In many ponds here, it is rather easy to encounter a huge dragonfly patrolling a pond by flying along the pond margin with great speed and purpose. Chances are it is the Hairy Emperor, appropriately named by the way it seems to lord over a pond. 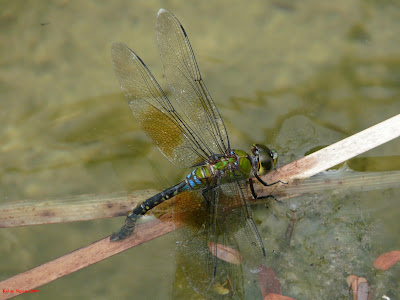 Aeshnids are unlike most other dragonflies in that females will insert their eggs into plant tissue. This ovipositing mode is the same as damselflies. Aeshnid females have well-developed ovipositors to cut minute slits into plant tissue for egg insertion. This behaviour is seldom seen so I was very fortunate to witness an Anax guttatus with colleagues recently. The videos show a female ovipositing into the floating plant stem. A. guttatus, when not flying at speed, is quite easy to recognise with its overall greenish colour and blue pattern on the abdomen. Up close, it is a beautiful and impressive dragonfly.
The larvae are another fascinating aspect of these insects. Depending on their behaviour and microhabitats, anisopteran larvae are typically recognised into four broad categories: claspers; sprawlers; hiders; and burrowers. Aeshinids larvae are generally claspers as they cling onto submerged vegetation or twigs. They are elongated with large prominent compound eyes. The shape and position of those eyes can be used to identify aeshnids larvae to genus. Anax species larvae have large forward facing oval-shaped eyes. They are very aggressive, excellent hunters. Apparently they can also change their colouration with each successive moult to suit their surroundings for better camouflage. I think this emerald green Anax larva is particularly eye-catching. 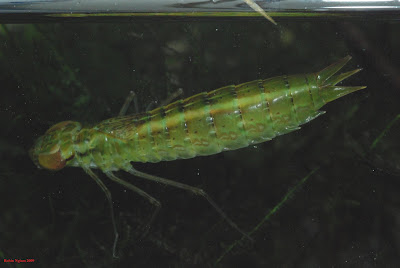 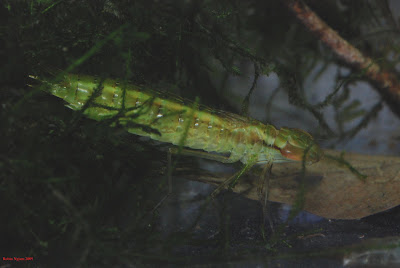 The labium is unique to odonates. It is basically an extensible organ with hook and pincers to ensnare prey. It is like an energy storage mechanism which can be released with speedy accuracy. Sight and labium co-ordination required by a larva to capture prey is undoubtedly precision of the highest order. 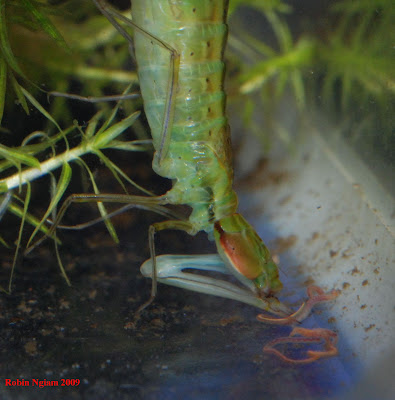 Thanks for this article. Here in the southeastern US we have an anax called the Common Green Darner it looks almost just like this guy. In another week or two I'll be able to find the larva emerging out of my pond.

I seldom leave comments on blogs, but you really impress me, also I have a few questions like to ask, what's your contact details?

You can email me at yanrobin@hotmail.com

I always motivated by you, your views and way of thinking, again, thanks for this nice post.

ha, I will experiment my thought, your post bring me some good ideas, it's truly amazing, thanks.

I always inspired by you, your opinion and way of thinking, again, appreciate for this nice post.