We spent a relaxing Christmas afternoon in laidback Kranji countryside. After a sumptuous lunch, we headed to the farms dotting the area and as the sun began to set, we took a leisurely hike towards the Kranji Marshes. The scenic Kranji Marshes hug along much of Kranji Reservoir’s perimeter. Marshlands are an increasingly rare habitat in Singapore as many have been lost to urban development.

As we took in the view, a series of loud chuckling and cackling greeted us. Out of a sudden, two dark purplish-blue birds with bright red bill emerged from the water vegetation. What a fortune! Its the unmistakable Purple Swamphens (Porphyrio porphyrio). I’ve previously only caught a glimpse of this elusive bird a year back so this was an excellent Christmas present from Mother Nature. Not only did the birds made an appearance, one of them was foraging uninhibitedly about 30metres away. 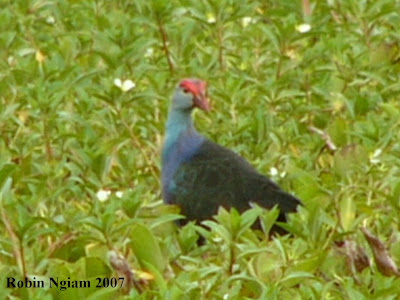 Purple Swamphen is a member of the Rail family which also includes the more common White-breasted Waterhen (Amaurornis phoenicurus). They inhabit mostly swampy and marshy habitats. These birds have a clearly distinguishable robust stout body, short tail and are rather weak fliers. Their huge red bill, red frontal shield, red legs and purplish-blue plumage make them one of Singapore’s most attractive marshland birds. 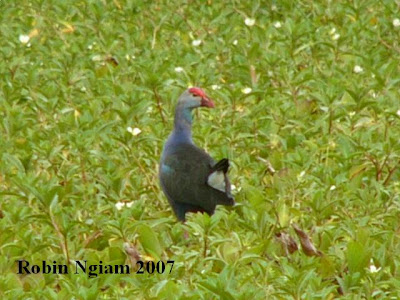 Purple Swamphens have a very conspicuous white undertail covert. The birds will constantly flash this white rump patch by jerking their tail up and down. Research suggests that this behaviour is a form of prey-predator communication whereby a bird’s state of alertness is communicated to a potential predator, thus discouraging the predator from a vigilant prey. Perhaps that was exactly what the bird was trying to tell us that Christmas afternoon. We certainly would not have the heart to harm such a fine-looking creature. 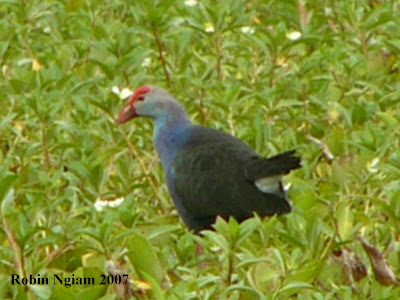 Hello I just entered before I have to leave to the airport, it's been very nice to meet you, if you want here is the site I told you about where I type some stuff and make good money (I work from home): here it is

very good but i want something about when they mate and who their predators are!

very good but i want something about when they mate and who their predators are!

This particular tendency has got hit the latest amount because of
involving on-line blog-post providers you could take on the
trail. Will certainly end users take more time on the net, blogs like help them quit their particular research into super speed
Check out my page Genital Warts Home Treatment