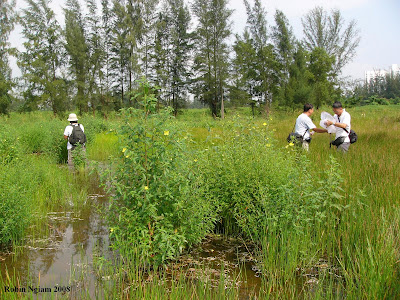 Another odonate survey with the gang, this time to the ponds of Marina East. The habitat is dominated by thin grass-like vegetation. Not very sure what plant it is but most probably belongs to the Cyperaceae family. The water itself is full of brownish algae and there’s a slight smell typical of eutrophic waters. 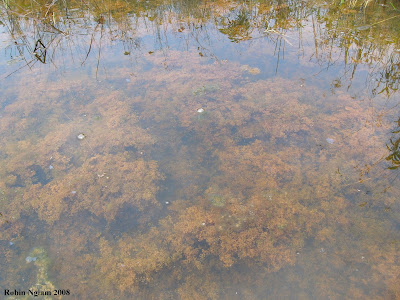 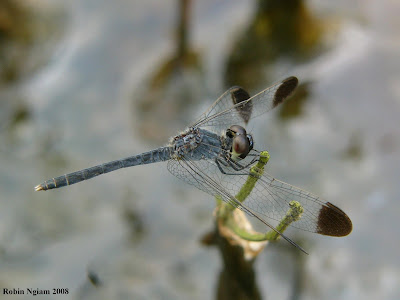 Nevertheless, this is an excellent habitat for odonates. They are in high abundance and are very active thanks to the warm morning sunshine. The most numerous species is Diplacodes nebulosa. They are very distinct due to the dark tips on their wings. All the males are defending a small territory and chasing each other, zipping all over the water surface. 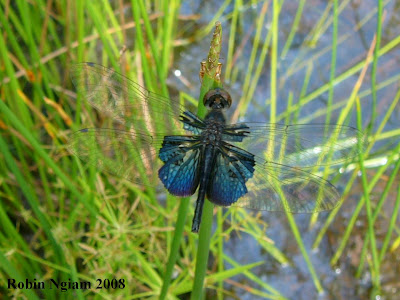 The most striking dragonfly there has to be Rhyothemis triangularis, aptly named due to the deep metallic blue triangular patch on its hind wings. Dragonflies from the genus Rhyothemis characteristically have short abdomens with broad hind wings. Some of them are quite common in open countries or streams in swampy forest. R. triangularis is common and widespread in Asia. However in Singapore they are rather uncommon as habitats akin to the Marina East ponds are few and far between. 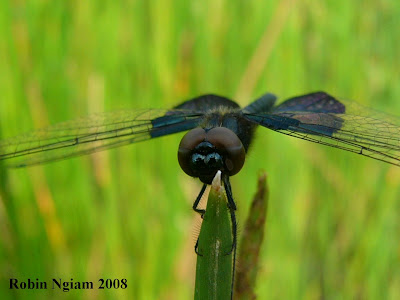 But odonates are not the only creatures inhabiting the ponds. From afar, a Lesser Whistling-duck (Dendrocygna javanica) made an appearance. This is a nationally vulnerable bird. Once again habitat loss is the main cause as freshwater ponds are destroyed when urbanisation encroaches. This bird has an estimated population of 250 in Singapore. 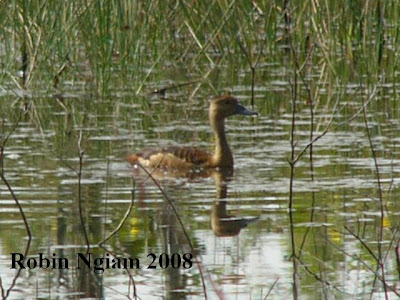 As we left Marina East, I sensed a “melancholy in the wind and sorrow in the grass” (Charles Kuralt). How much longer will this location remain as it is? Its neighbour at Marina South is already morphing into the Integrated Resort. Rumour has it that Marina East will become a golf course. “Another golf course?!” Tang sighed.

Perhaps we could get the developers to build the golf course while preserving this small nature haven? My mind begins to sparkle…