Some of the rarest damselflies in are restricted to the remaining forested streams in our nature reserves. It is always a pleasure to encounter them and more so to witness an intimate affair. I recently sighted two rare species at the same location along a clear flowing stream. 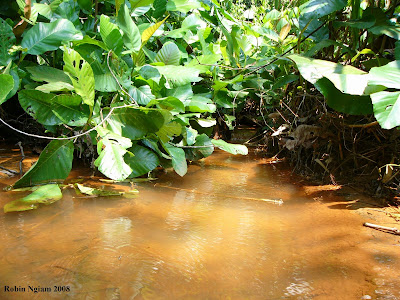 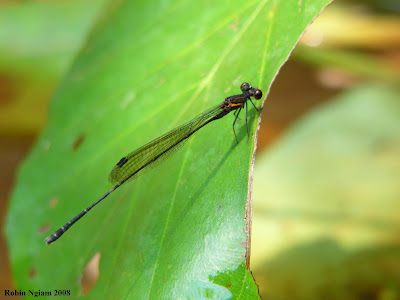 The first was Prodasineura humeralis. It is quite common in Peninsular Malaysia but in , it was first recorded only in 2006. The prominent linear orange markings are distinctive. There are several species from the genus with very similar orange/yellowish markings. In fact P. humeralis was previously listed as P. verticalis from Peninsular Malaysia so it seems there is a degree of interspecific and intraspecific variations. More work on the many species from this genus awaits further investigations. Prodasineura species usually perch in sunlit spots along forest streams and are in high densities where they occur. I saw three of them within the same area.

Just about 50cm away was a mating pair of Pseudagrion pruinosum. The intimate pair was oblivious to my presence thus enabling me to document their love tryst. 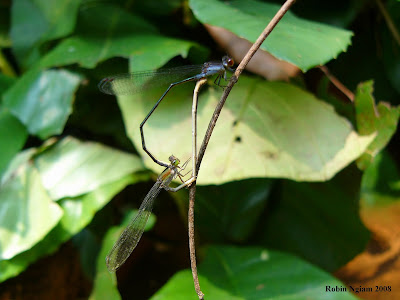 After about 10 minute’s copulation, the pair flew down to the stream and the female started ovipositing. 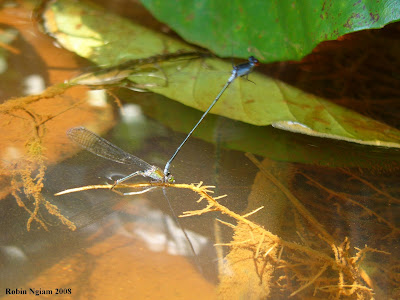 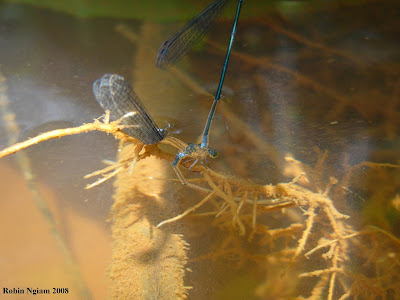 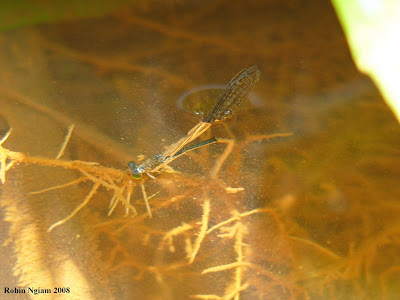 After a while, the male released his grasp and the female descended underwater.

The video clearly shows the female searching for ovipositing spots with her abdomen. She surfaced and flew off easily due to the fact that her forewings remained dry thanks to it being shielded by the closed hindwings.

Whilst the female was submerged, the male waited nearby on a leaf. The instant she surfaced, he grasped her again in eagerness for another round of mating. 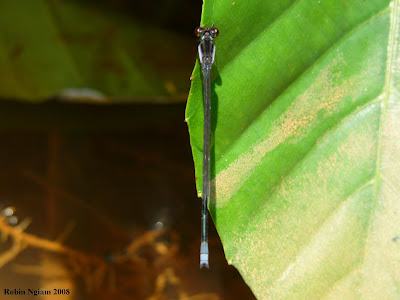 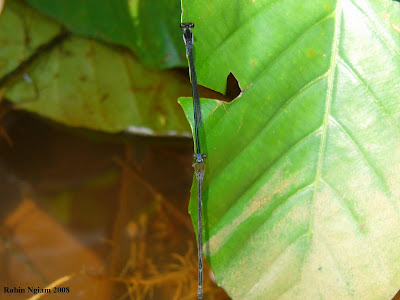 This is the first time I witnessed such behaviour and am suitably thrilled. According to literature, underwater oviposition occurs only in endophytic odonates in particular the damselflies but this ovipositing mode is not a compulsory with regards to any particular species. Some advantages of underwater oviposition include exemption from interferences from males and protecting the eggs from desiccation.

Studying odonates has honed my patience and observational attributes. I eagerly anticipate the next exciting observation in the field.

Pictures and videos taken at: Mandai forest, May 2008.

Orr, A. G., 2003. A Guide to the Dragonflies of . Their Identification and Biology, Natural History Publications () Sdn. .

Yes, its really interesting. Males of some species are known to assist or 'rescue' the submerged females. This is presumably so that the male can ensure a subsequent copulation.