A large swarm of Rhyothemis phyllis was encountered recently. There was at least 50 or more individuals flying around within a small opening in the forest. This species is known to form large swarms where they engage in rather slow, gliding midair foraging. Aggregation of foraging dragonflies has been well reported by odonatologists. In fact mass swarms like this occur more often in lee situations where there is shelter from wind.

R. phyllis is one of the most commonest species and very easily recognised by its wing patterns. A close up shot allows me to examine the intricate details of its wings. In terms of aerial versatility and agility, dragonflies probably stand at the peak of flight evolution among the insects or even some birds. Two wing structures play a key role. The nodus helps in the elastic tension thus allowing strong twisting and also as a shock absorber. The pterostigma at the distal edge on the wings provides favourable pitching moments during wing flapping acceleration. This then raises the critical gliding speed where self-excited vibrations take place therefore enabling a more efficient wing stroke with less power expenditure. 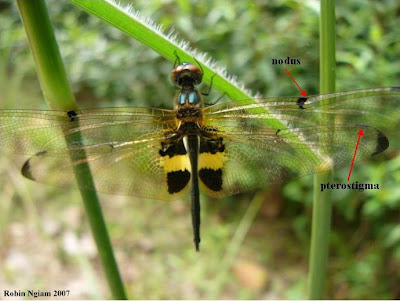 While out on survey work, I’m always the one chasing after dragonflies. So it was a good change to have dragonflies flying all around me uninhibitedly.