Thanks to Ria and the Semakau Book team, we had a chance to explore the back mangroves of Semakau a few weeks back. Because of the mangrove’s general good health, I was expecting to find the mangrove specialist Raphismia bispina (Bispina Skimmer). Thus it was a delight to finally spot two blue males flying within a sunlight spot among the prop roots. 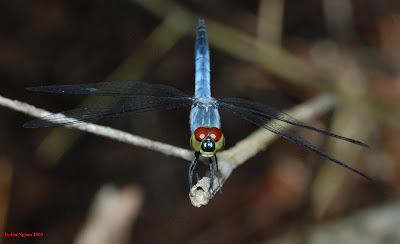 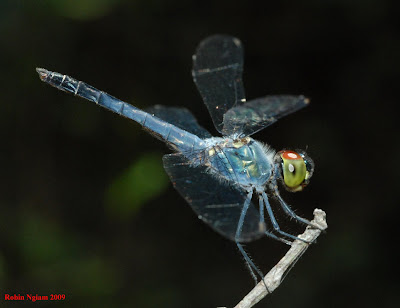 This dragonfly is one of two or three species in Singapore that have adapted to back mangrove habitats. It is an inconspicuous dragonfly where males usually perch for long periods defending their territories. Although widespread throughout Sundaland, it breeds only in salty water of back mangroves. It is therefore highly specialised and rather rare. In Singapore, R. bispina is classified as uncommon and has been recorded from only a handful locations. 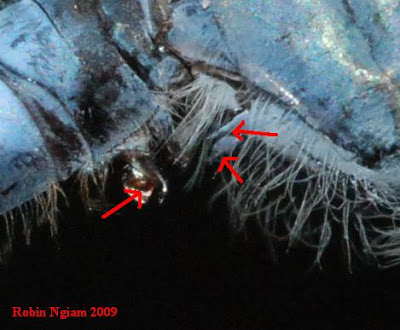 Two features are used to distinguish this species from others. Raphismia bispina has two downward pointing spines behind the hind legs at the rear of the synthorax. It also has two bifid process projecting from beneath abdominal segment S2. It’s difficult to see these tiny features unless there’s a close-up photograph. 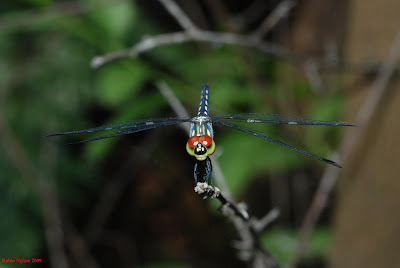 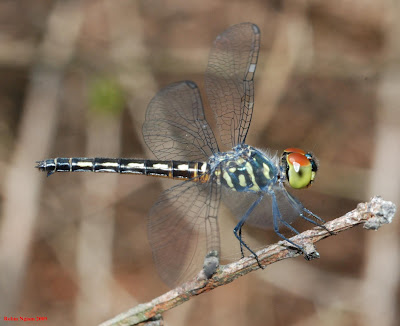 We were lucky to observe a female while on the way out. She has mottled yellowish patterns on the thorax and yellowish streaks running down her abdomen. Like the male, she perched patiently on a branch and we could see that she’s gleaning for prey. She awarded us with good close-up shots and her vulva scale beneath the abdomen tip was visible. This ‘spout’ like structure is where eggs leave the females during ovipositing. Vulva scale is not found in those dragonflies that oviposit into plant tissues. 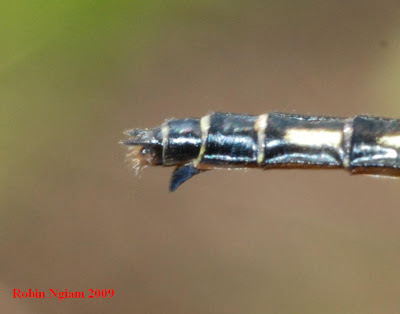 Mr. Joe Pan from Sabah also had a recent wonderful encounter with this mangrove specialist. In Borneo, R. bispina is known only from the extreme northern tip and Brunei.

Dragonflies larvae are typically hyperosmotic regulators in fresh to moderately saline waters. According to Corbet (1999) most species adapted to brackish habitats generally occur in waters not exceeding 8.6% of the salinity of seawater. It will be interesting to investigate if this is also true for R. bispina.

Wow, thanks for sharing about this fascinating dragonfly! We've sure learnt a lot about these creatures of Semakau from you and the Dragonfly Team.

Hi Robin,
Seems like a coincidence that we find this species at about the same time! I had a wonderful time chasing these little insects in the mangrove to photograph! I even found the remains of one in a spider web!
Cheers.