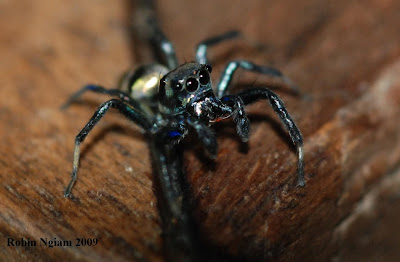 Jumping Spiders are one of the most efficient hunters of insects. They have superb abilities to spring onto prey with precise accuracy. This precision is mostly thanks to their keen eyesight. The eyes arrangement is such that they have an almost 360° field of vision. Two huge front eyes give jumping spiders a telephoto-like system while eyes at the sides are akin to stereoscopic wide-angle lenses. A Banded Phintella (Phintella vittata) shows very clearly the ever vigilant eyes ready to process an all-round image, directing the spider to make the next precise jump. 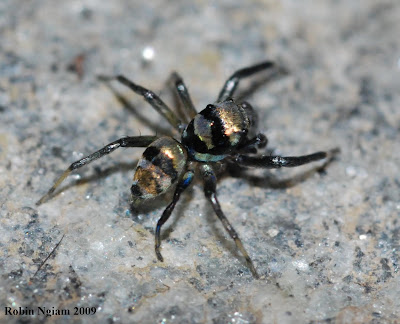 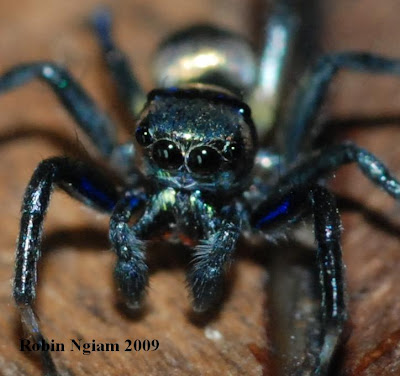 I love the slight golden tinge on its carapace and abdomen. A closer look reveals a streak of blue on the femur. This makes the spider even more attractive. Using innovative experiments, local researchers have shown that females of another jumping spider species (Cosmophasis umbratica) would spend a longer time observing ultra-violet (UV+) males than UV- males regardless of which male display more actively. This suggests for that species, male UV influence plays a role in female-mate choice. Perhaps similarly, the iridescent bluish leg femora would help a male Banded Phintella in attracting the opposite sex.

Banded Phintella can be encountered at gardens as well as forested habitats.

Enjoyed your posting and the photos. I have many photos myself of jumping spiders, surely my favorite of the spiders family.