The second episode of Once Upon A Tree: Tides and Coastlines brought us back to nostalgic Singapore. Those were the days when people live much of their lives connected to the sea, for work as well as for play.

Work because, for example, The Raffles Hotel once stood just by the beach and would even be flooded during times of extreme high tides. Play, because trips to the sea then mean clear water, good fishing and excellent exploring on the seashore. The elders interviewed on the show mentioned big corals, huge fishes and dolphins were a regular sight. I’m quite sure one of the creatures they would have seen often too is this magnificent seashell, Voluta nobilis. 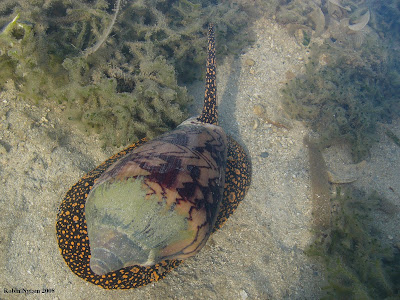 Voluta nobilis or “kilah” in the local language was once very common. They are now rarely encountered but still exists, mainly on our offshore islands. This pretty individual was spotted at Pulau Semakau recently. It’s been a while since I saw a live one, most of the time I found them as empty shells inhabited by hermit crabs. This individual’s siphon was fully extended as it searched for prey like bivalves. It will use its huge foot to suffocate and force its prey to open their shelves for oxygen. Once that occur, then its mealtime for V. nobilis. 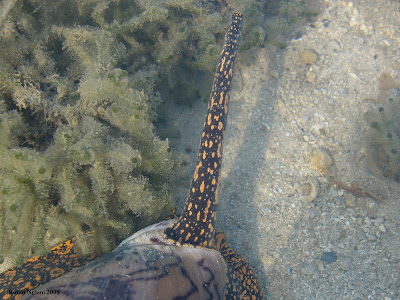 Perhaps the elders from the documentary would be glad to know “kilah” can still be found in our waters.

In Huay Yang we found a emty shell and a living Voluta Nobilis, and it was big the shell nearly 20 cm maybee a little bigger, unfortunatly we didnt take a picture. Date 2011/06/17.

Great blog here! Also your site loads up very fast! What host are you using?

Can I get your affiliate link to your host? I wish my website loaded up as fast
as yours lol

Feel free to surf to my webpage; next page

WOW just what I was looking for. Came here by searching for
smileys

My web page - more about
Also see my website > move next

I all the time used to study post in news papers but now as I am
a user of internet so from now I am using net for posts, thanks to web.


My site screen next

Paragraph writing is also a excitement, if you be acquainted with then
you can write or else it is difficult to write.

Today, I went to the beach with my kids. I found a sea shell and gave it
to my 4 year old daughter and said "You can hear the ocean if you put this to your ear." She put
the shell to her ear and screamed. There was a hermit crab inside
and it pinched her ear. She never wants to go back!
LoL I know this is totally off topic but I had to tell someone!

Hey there! I know this is somewhat off topic but I was
wondering if you knew where I could find a captcha
plugin for my comment form? I'm using the same blog platform as yours and I'm having difficulty
finding one? Thanks a lot!

my webpage - view more about

excellent issues altogether, you simply won a logo new reader.
What may you recommend in regards to your submit that you simply made a few days in the past?
Any sure?

Here is my web blog; next
Also see my site > click here

Hey! Would you mind if I share your blog with my myspace
group? There's a lot of folks that I think would really enjoy your content. Please let me know. Many thanks

Heya i am for the first time here. I came across this board and I find It really
useful & it helped me out much. I hope to give something back and help others like you helped me.


my weblog view next

Simply wish to say your article is as astounding. The
clearness in your post is just excellent and i could assume
you are an expert on this subject. Fine
with your permission let me to grab your feed to keep updated with
forthcoming post. Thanks a million and please keep up the enjoyable work.


Feel free to visit my page: move next

Woah! I'm really digging the template/theme of this site. It's simple, yet effective.
A lot of times it's difficult to get that "perfect balance" between superb usability and appearance. I must say you've done a superb job with this.
Additionally, the blog loads very fast for me on Chrome.

I do not even know how I ended up here, but I thought
this post was good. I don't know who you are but certainly you are going to a famous blogger if you are not already ;) Cheers!

Hi, I read your blog daily. Your writing style is witty, keep up the good work!

Great beat ! I wish to apprentice whilst you amend your
web site, how can i subscribe for a weblog web
site? The account helped me a appropriate deal.
I had been a little bit familiar of this your broadcast provided vibrant transparent concept

Here is my web page - artesanato

Good blog you've got here.. It's difficult
to find high quality writing like yours nowadays. I truly appreciate
people like you! Take care!!

Feel free to surf to my homepage ... kobal

I do not even know how I stopped up here,
but I thought this post used to be good. I don't realize who you might be however certainly you're going to a famous blogger should you are not already.
Cheers!

Hi my loved one! I want to say that this post is amazing, great written and
come with almost all significant infos. I'd like to peer extra posts like this .

Here is my web blog: fcntl

Thanks for the auspicious writeup. It actually used
to be a amusement account it. Glance complicated to far delivered
agreeable from you! By the way, how can we be in contact?

Currently it sounds like Movable Type is the best blogging platform available right
now. (from what I've read) Is that what you're using on your blog?