I was on Petai Trail recently and chanced upon this weird insect perching on a twig. It was motionless and thus perfect for a macro shot. It is about half the size of a palm and at first sight, looked rather fragile with its long abdomen hanging in mid-air. The poor insect seemed to be hanging for dear life.

It was only after I took a closer look at the picture and identification by Yixiong that I realised I’ve caught a glimpse of a fearsome predator of the insect world. 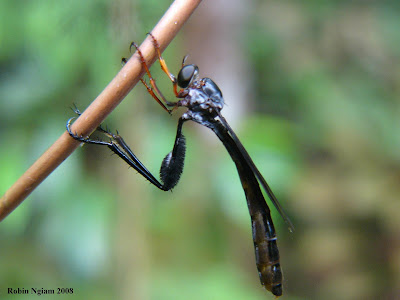 This is a Robber Fly from the Order Diptera (true flies). True flies are distinguished from other flying insects by having only a single pair of wings while their hind wings are greatly reduced into flight balancing organs called halteres. Robberflies belong to the Asilidae family but we are not sure what this particular species is.

Taxonomic classification aside, it is the ecology of robber flies that’s really fascinating. They prey on all sorts of insects, from easy ones like butterflies to prey that can put up a good fight like wasps, bees, spiders and dragonflies. In fact, some species are specialist hunters who target specific prey. Upon successful capture, a robber fly will inject its prey with saliva containing neurotoxin and other enzymes which immobilise the prey and liquify the tissue. Thereafter, the robber fly will suck on the soupy meal. 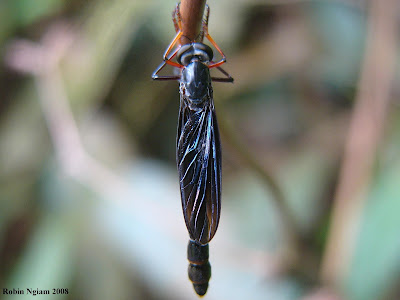 Not sure how well robber flies are studied in Singapore. But unsurprisingly, there’s tons of information on the web. This website http://www.geller-grimm.de/general.htm is one of the more comprehensive.

I've seen this robberfly here in Sabah too, I think it's the same species... I'll try to find the fotos and check. great blog you've got here!
Cheers.

I just found my photo to the robberfly. I believe it is of the same species. Would like to email it to you but don't have your email addy.

Hi again robin,
My photo of the robberfly can be seen here:

Edda heyday, a construction bunch turned up to start erection a billet on the inadequate in lot.

job adjacent on next door and drained much of each faint of epoch observing the workers.

Person heyday, a construction group turned up to start erection a billet on the inadequate in lot.

activity flourishing on next door and dog-tired much of each age observing the workers.

Hello. Facebook takes a [url=http://www.casino-online.gd]casinos[/url] game on 888 casino see trade: Facebook is expanding its efforts to launch real-money gaming to millions of British users after announcing a sell with the online gambling retinue 888 Holdings.And Bye.

Hello. Facebook takes a [url=http://www.casinobonus.gd]casino bonus[/url] gamble on 888 casino apportion: Facebook is expanding its efforts to alliance real-money gaming to millions of British users after announcing a practise with the online gambling associates 888 Holdings.And Bye.