I’ve seen females ovipositing several times while out in the field. The most recent encounter gave me a chance to record videos of a particular female ovipositing in ultra speed mode.
This is the female of Tyriobapta torrida. She was flying in a circular motion at high speed and using the trajectory force to project water droplets and her eggs onto the water edge. Its amazing how fast she was flying and I can only imagine the aerodynamics involved. The lift and drag forces must be rather intense as well as the wings locomotion in overdrive to maintain the flight pattern. Not only that, she was going at it for almost 7-8 minutes. This is a lot of energy expended to produce the next generation. If only I can view this video in slow motion, which will certainly give an insight into the flight mechanics.

All the while, the mate-guarding male was hovering nearby. T. torrida males are easily recognised by the dark iridescent patch on the hind wing base. This species is rather common in our forests. T. torrida is the largest species within its genus. Where they occur, they are usually abundant with several individuals occupying and disputing small territories. Sexual activities are known to peak at around noon. 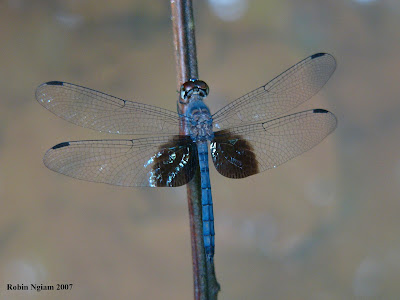 Corbet’s book described females from some other species diving underwater and ovipositing while submerged. Some species have been recorded to descend down to 1m depth. Now that is really a sight I want to behold.

This post is dedicated to Professor Philip Corbet who passed away on 13th February 2008 aged 78.

Hello I just entered before I have to leave to the airport, it's been very nice to meet you, if you want here is the site I told you about where I type some stuff and make good money (I work from home): here it is

Hi Robin,
You have a fantastic blog here, thanks for letting me know and for linking to my little odonata blog.

Your video of the superfast odonata oviposition is simply unbelieveable!

I've listed your gr8 blog in my dragon blog :)