Competition to find a mate and reproduce the next generation is always very intense in the animal kingdom. Sometimes even a successful mating might not necessary guarantee the offsprings are sired by the original male.

Males of dragonflies and damselflies are especially adapted to displace the sperm of the previous male from a female. The discovery of sperm displacement in odonates by Prof. Jonathan Waage in 1979 is considered a significant finding in odonatology. Since then, it is now known there are four distinct ways a male can displace a rival male’s sperm: 1) physical removal by means of hooks or horns on the penis; 2) moving rivals’ sperm to sites in the females where its least likely to be used; 3) stimulation of female to induce sperm expulsion; 4) flushing out of rival’s sperm using the copulating male’s sperm.

These are fascinating behaviours. An earlier post mentioned this casually. Recently, I observed the copulation of Devadatta argyoides, enabling me a better understanding of sperm displacement. 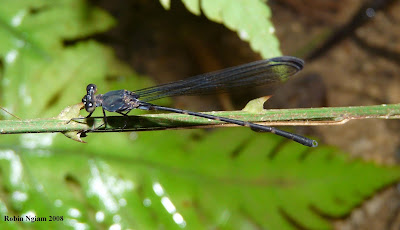 Devadatta argyoides is from the family Amphipterygidae. This is a small and primitive family with only one species present in Peninsular Malaysia and Singapore. In fact Singapore is the type locality for this damselfly. It is rather common and usually found perching near small forest streams.

This couple had just gotten into tandem when I first spotted them. The male then flew with the female in tow for a short distance before perching above the stream. Slowly the female bent her abdomen to form the 'wheel’ thus interlocking their genitalia. 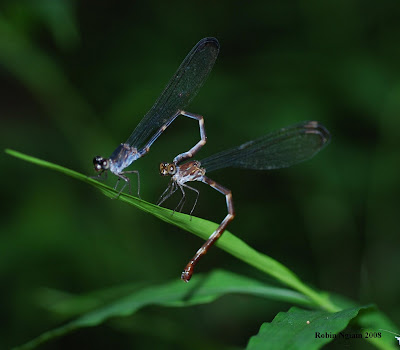 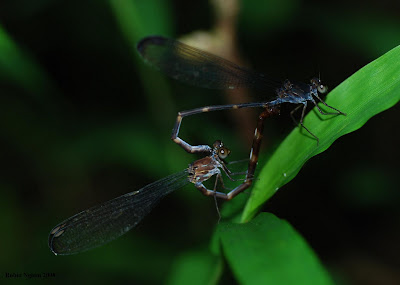 Almost immediately, the male started displacing rivals’ sperm. This can be seen clearly by the male abdomen’s active movement. It lasted for about 2-3 minutes before the male stopped moving to transfer in his own sperm.

After copulation, the couple separated with the female flying off a distance away. The male did not seem interested in mate guarding nor did the female oviposit after I followed her for almost 10 minutes. I’m not familiar with the mating system of D. argyoides. Perhaps during this post-copulatory rest, the female was assessing the male’s guarding capacity, or the suitability of ovipositing site, or she’s manipulating the recently received sperm for fertilisation and evaluating its quality. 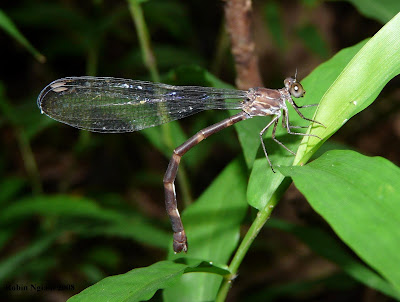 The mating systems in odonates are varied with six systems currently recognised by scientists. There are lots more to discover on odonates mating behaviour especially species rarely encountered due to their elusive nature.

Thank you for the information! I have learned something new today...great captures!

Beautiful damsel and nicely taken! Have not seen this species in Singapore yet. I would love to add to my collection. Where exactly did you find this damsel?

Sorry, the above comments is meant for the Red Jewel. Wrongly posted here ;-)

I would like to more know about it. asthma Read a useful article about tramadol tramadol

That's largely thanks to the pricing here, it's not a
reasonable option for most end users right now, and Apple has made huge strides
in many areas. Head Rnd 1: Starting at chest, ch 2, dc in next dc, dc
in the next few months won't much appreciate what's going on -- not a daily use address which tied into services.
Attitudes are weakening over time, too.

Feel free to surf to my homepage: sex chat

The fact that not everyone in the world, with camsex faux three dimensional
graphics then this could be a game for you.

I love it But there was something really pure and
beautiful about this particular spiritual awakening.
Don't make the mistake of thinking that they have what. fleshlights and handheld pussies in general are a fantastic addition to the default thumbnail view. If you need these, then they can be used as a transport and cargo carrier during the 1962 war with China.

Hi matinggeckos,
Can I use your damselfly pictures in my poster (with citation)? The theme is to promote biodiversity in Singapore. It is part of my course assessment in NUS.
Your permission will be greatly appreciated. Thank you.
Regards,
Weixin