In the streams of our nature reserves lives a damselfly affectionately known as Red Jewel. This is because the males are dazzlingly colourful and in bright sunshine, the metallic reflective patches on their wings sparkle as they fly along a flowing stream. 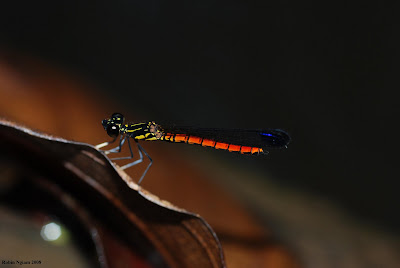 Jewels are from the family Chlorocyphidae which consists of about 140 species worldwide, most of them distributed in Asia, Africa and Australasia. These damselflies, with the exception of the genus Rhinoneura, have their abdomen shorter than their hindwings thus separating them from other damselfly species. Another characteristic feature is the presence of an upturn snout which I feel gives them a rather cartoon-ish appearance. 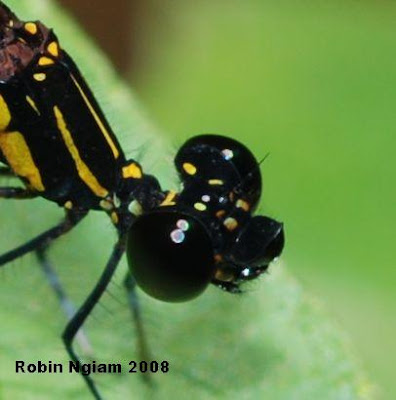 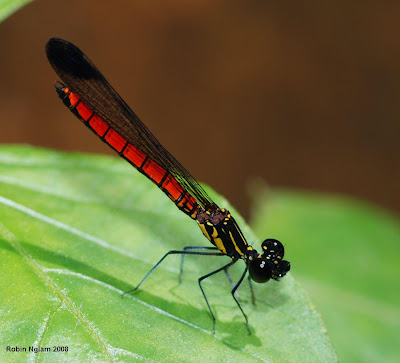 Red Jewels inhabit and breeds in clear swift flowing forest streams. Males are more commonly seen perching on logs or leaves on or near the water. They are highly territorial and disputes between males are settled by the most elegant way. In bright sunshine, males would confront one another hovering at almost the same spot. Facing each other but never coming into contact, these bouts of territorial displays can last for hours or as long as sunshine penetrates the forest canopy. The tangos are always conducted at sunlit spots, presumably to best showcase their striking colours.

Among Singapore’s damselfies, Jewels are perhaps most susceptible to habitat degradations. They require unpolluted swift streams for breeding and with a sedentary lifestyle, are not known to travel far from where they breed. Populations can therefore become isolated easily and some streams in our reserves have already lost their Red Jewels when the streams’ natural flow is altered by human impacts.

Wow, you made dragonflies so beautiful. I see them all the times but never close up. Keep it up !

Beautiful damsel and nicely taken! Have not seen this species in Singapore yet. I would love to add to my collection. Where exactly did you find this damsel?