Three months back, I was on work assignment in Nairobi Kenya for 13 days. Most of the work time was spent in the United Nations compound. Within the huge UN complex, many artificial but well vegetated ponds exist. It thus gave me the opportunity to explore African dragonflies. Although common species in Africa, they nevertheless filled me with joy and a sense of adventure upon seeing something new. I can now make a comparison on Singapore’s dragonflies and their relatives across the Indian Ocean. 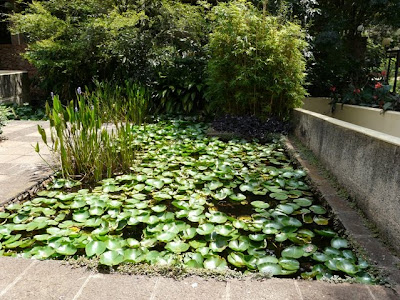 Damselflies from the genus Pseudagrion come from a large widespread subfamily Pseudagioninae. We have four species here including a very rare one, Pseudagrion rubriceps (Orange-faced Sprite) which now seems to exist only at the pond in Toa Payoh Town Park. 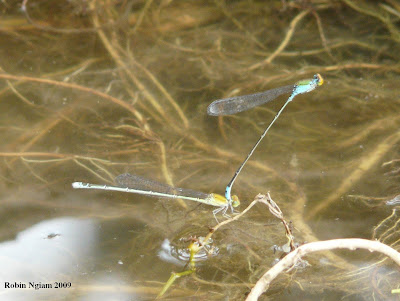 I saw three relatives in Nairobi. One of them is Pseudagrion salisburyense (Salisbury Sprite) that has a range from interior South Africa to east, central and western Africa. 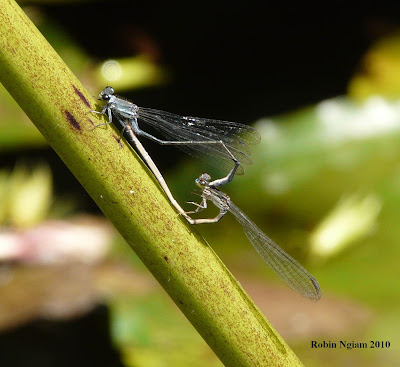 Pseudagrion massaicum (Masai Sprite) is an extremely beautiful damselfly. Males have red eyes, orangey thorax, green markings along the abdomen and blue abdomen tip. Surely one of the most colourful damselfly I’ve seen. 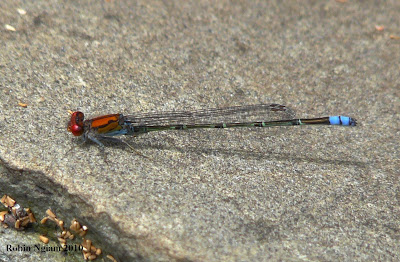 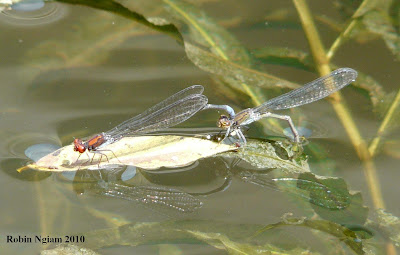 The last Pseudagrion species can’t be identified with certainty. Its either P. spernatum or P. kersteni. 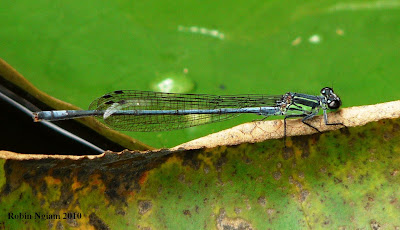 Ceriagrion is another large genus but only two species are in Singapore. Ceriagion chaoi (Fiery Coraltail) in Singapore is very much like Ceriagrion glabrum (Common Citril) from Africa. Their colour scheme is very similar but C. chaoi has a brighter red abdomen and olive thorax. 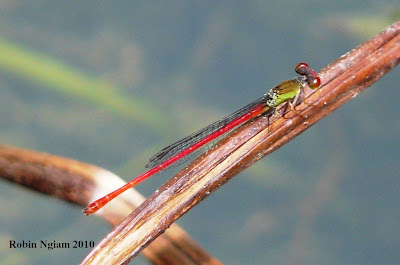 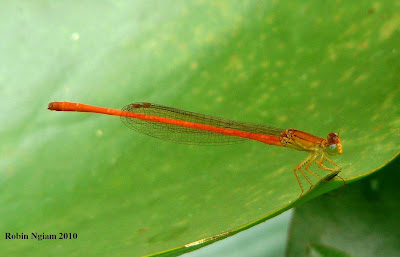 Dragonflies of the genus Trithemis are from the subfamily Trithemistinae or commonly called Dropwings. There are more than 50 Trithemis species worldwide, and they are essentially African but five have made it to Asia. Singapore has three species. One example is Trithemis festiva (Indigo Dropwing). Here, this species is predominately stream loving and have adapted very well to large canals and storm drains. 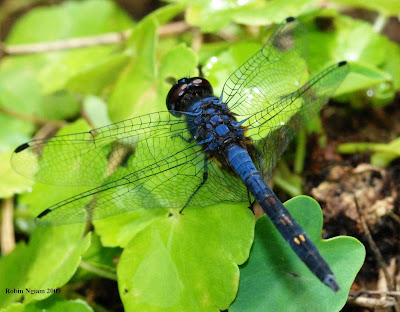 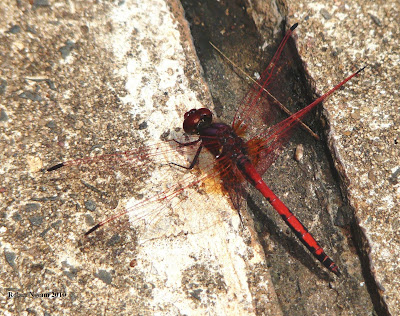 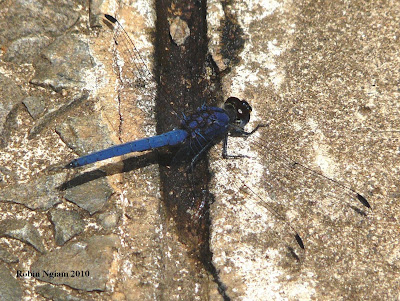 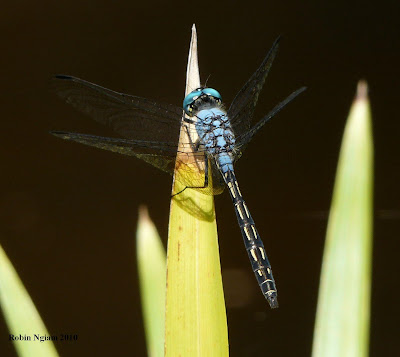 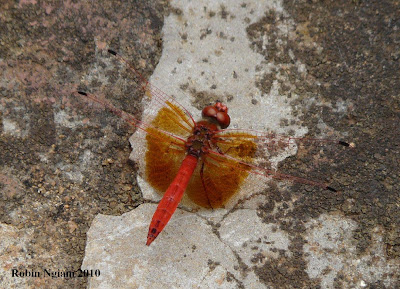 The widespread genus Brachythemis is from the subfamily Sympetrinae. Singapore has one representative, Brachythemis contaminata (Common Amberwing). Wherever B. contaminata occurs, they are always in great numbers and have a habit of flying close to the ground especially the females and immature males. 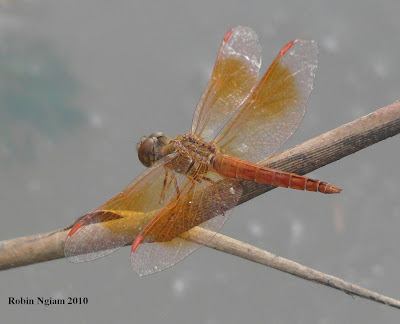 In Africa, Brachythemis dragonflies are also known as Groundlings. One species from Nairobi is Brachythemis leucosticta (Banded Groundling). Males have banded wings while females have clear wings. 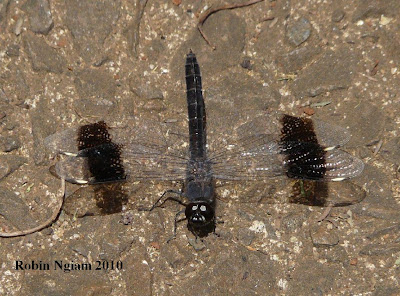 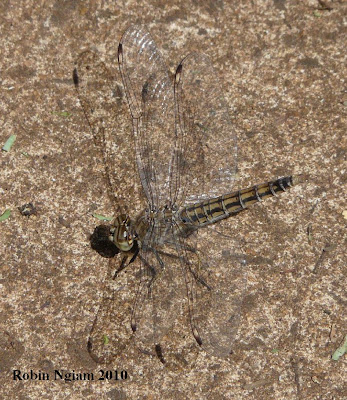 Probably the most common dragonfly genus in Singapore is Orthetrum (subfamily Libellulinae). We have five species, all of which can be easily seen. In Asia, some Orthetrum species have evolved reddish colour in mature males. However pruinosed blue in mature males is more common in the genus, for example our Orthetrum luzonicum (Slender Blue Skimmer). 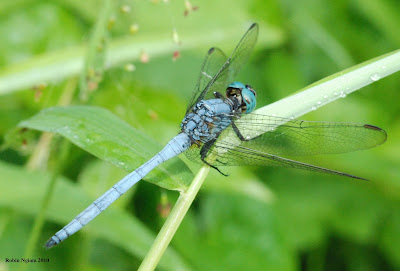 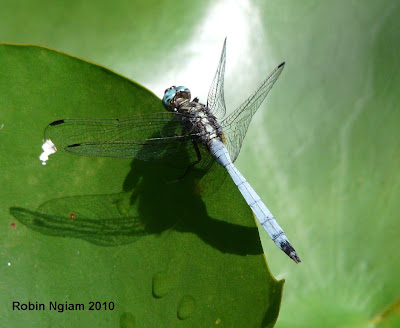 Aeshnids of the genus Anax are highly territorial. While in Nairobi, I spotted one big dragonfly speeding around a pond in a patrolling flight and immediately I knew it is an Anax. Very fortunately, it perched and I got a clear picture of this handsome Anax imperator (Blue Emperor). It is positively more colourful than Singapore’s Anax guttatus (Emperor). And a bonus, an ovipositing female was sighted the next day. 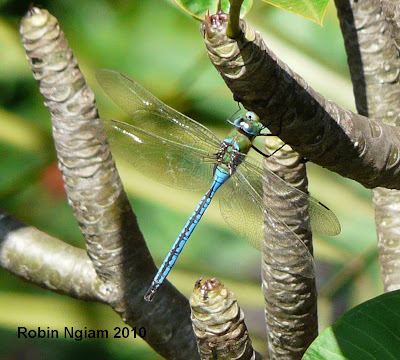 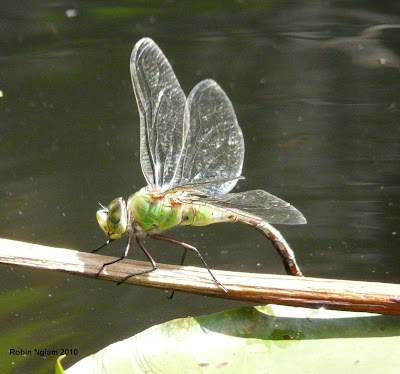 Aside from those highlighted here, I observed 15 species in total. It was great to see those African relatives. There’s much more to learn on dragonflies knowledge beyond Singapore. Furthermore through these sightings I got acquainted with Klaas-Douwe B. Dijkstra and Viola Clausnitzer. Both of them are experts in African dragonflies and very friendly in helping to confirm the species. Not forgetting Warwick and Michele Tarboton who generously sent me their guidebooks before I left for Kenya.

Hence local dragonfly lovers should take all opportunities to spot dragonflies beyond Singapore. Remember, there’s about 5700 species in the world!

It's appropriate time to make a few plans for the future and it's
time to be happy. I've read this publish and if I may just I desire to counsel you few interesting issues or suggestions. Perhaps you can write subsequent articles relating to this article. I want to learn more issues approximately it!

Thanks for a marvelous posting! I certainly enjoyed reading it, you happen
to be a great author.I will be sure to bookmark your blog and may come
back very soon. I want to encourage that you continue your great writing, have a nice day!

Your method of explaining everything in this article
is truly pleasant, all be able to easily be aware
of it, Thanks a lot.

Good info. Lucky me I found your site by accident (stumbleupon).
I've book-marked it for later!

I truly love your website.. Pleasant colors & theme. Did you make this website
yourself? Please reply back as I'm looking to create my own website and would like to learn where you got this from or exactly what the theme is called. Appreciate it!

Feel free to surf to my weblog; mazda rx 8 engine

What i don't understood is in truth how you're no longer actually a lot more smartly-preferred than you may be right now.
You're very intelligent. You know therefore considerably in terms of this subject, produced me individually imagine it from numerous varied angles. Its like men and women are not involved except it is one thing to do with Lady gaga! Your own stuffs nice. All the time handle it up!